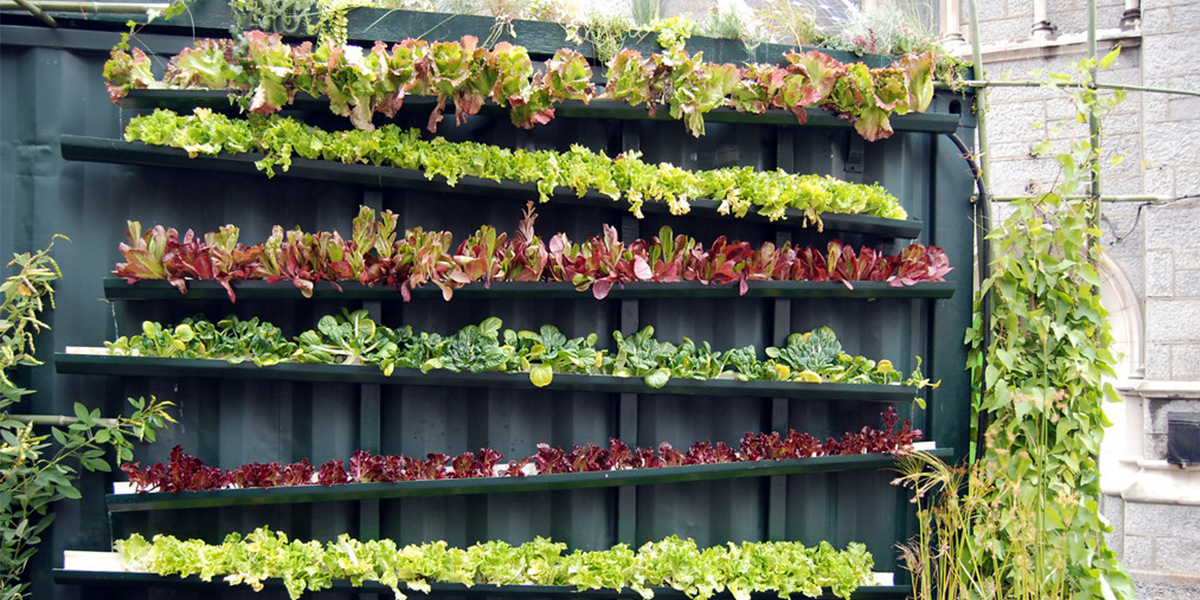 Vertical farming has been called the future of agriculture and has been claimed to solve many of the problems we are facing in the world we live in today. It has been a controversial topic with mixed opinions from leading experts in the hydroponic and horticultural industry. But can the transition from flatland to vertical farming production make a difference in the way we produce and consume our fruit and vegetables?

While vertical farms can use soil, most utilise hydro, aero or aquaponics as these methods use much less water than the soil practices we traditionally use. Hydroponics replaces soil by using a circulating water and nutrient mix for plant growth. Aeroponics uses an open membrane with water spray nutrients, and aquaponics uses aquatic ecosystems to balance nutrients in both systems.

What Is Vertical Farming?

Strictly speaking, the term vertical farm could be used in reference to structures that grow food on multiple levels, and this could range from small-scale hobby spaces to large automated buildings.

For many, the image of the vertical farm is a city skyscraper filled with fruit, vegetables, trees, and perhaps even animals. Whilst some concepts look amazing, these visions of farming lend credibility to the vertical concept. Skyscrapers represent very expensive real estate and are usually reserved for high-value activities. Growing fruit on trees, or rearing animals humanely have a low value density. This isn’t a problem if you have acres of inexpensive land to produce your medium, but it can if you’re using premium real estate.

Even if you’re growing a dense premium crop, the cost of growing also increases exponentially with height. The requirements to pump water and move biomass vertically takes considerable energy. This may be insignificant for a ten-level farm, but would likely be prohibitive for a farm with hundreds, or thousands of levels. While there are a number of architectural concepts for skyscraper farms, as yet, only one is being built. The world food building is currently under construction in Linkoping, Sweden. While information for this building is limited, even if it achieves its target costs of 40million dollars, is it highly unlikely to recoup that money with its production capacity of 550 tons of vegetables per year.

Wall farms and rooftop farms often share a similar visual appeal to skyscraper farms. Unlike skyscraper farms, these don’t displace existing real estate. Instead, they aim to utilise unused spaces to grow food, As such, the cost of adding these types of farm is often minimal. Many of these farms are created by hobbyists and doubled as gardens. As such, the addition of green space to the urban environment is considered a welcome one. While this may seem like good news, the amount of usable surfaces for growing food is extremely limited. In fact, Dickeson Despommier, the man who is credited with inventing the term ‘vertical farm’ came up with the concept, after his students calculated that rooftop farming could supply just 2% of 2015’s New York Population, by fully utilising all of its rooftops for growing. This was when he turned to the idea of skyscraper farms. Even if we make use of all usable rooftops in the world, we would only be able to save a fraction of a percent of global land. So, while rooftop farms aren’t a bad use of otherwise wasted space, their ability to affect the global challenges are negligible.

Vertical greenhouses are largely transparent structures that use multiple growing levels. One of the challenges that is introduced by stacking greenhouse levels on top of each other, is providing enough light as the glass or polymer structure already absorbs some of the sunlight and stacking vertically increases the risk of shadows. Vertical greenhouses can get around this problem by rotating the levels to get a relatively even distribution of sunlight. By adding supplementary artificial light, vertical greenhouses can grow to a higher plant density than a typical greenhouse. Although capital costs and electricity costs are higher. This makes them better suited to urban environments where land is at a premium. Vertical greenhouses essentially allow you to move production closer to consumption. Both horizontal and vertical hydroponic greenhouses are promising technologies that will help comeback the global challenges as they require 10 to 15 times less land and water than traditional agriculture. Given that commercial hydroponic greenhouses are a relatively mature industry, their viability and scalability is not in question. These greenhouses can grow a broad range of fruits and vegetables but are not used to grow staple crops such a broad range of fruits and vegetables but are not used to grow staple crops such as wheat, which accounts for the majority of land and water demand. They’re also expensive to run in some areas. If we use greenhouses to produce our global vegetables and some fruits, we would save less than 2% of our global land, barely enough to offset a projected 2050 land loss and less than half of the 55% increase in water demand. While greenhouses may alleviate some of the global challenges, it’s not enough to prevent the worst of the problems. If we really want to stop and reverse global challenges, we will need a more radical approach.

Plant factories are the most technologically advanced version of the vertical farm. They are airtight, highly climate controlled buildings, with a CO2 enriched atmosphere. They’re essentially clean rooms, like those used in drug or satellite production. Production rooms contain plants on multiple levels, they are sealed and thermally insulated with no windows. Relying on 100% artificial lighting. They’re aero or hydroponic, where transpired water vapor from plants is captured and condensed recycling it back into the hydroponic nutrient mix. They are typically warehouse size buildings, no more than a few stories in height. Plant factories offer the greatest level of land and water savings of all vertical farms. They also have the highest level of control and growing conditions, meaning that they can grow any type of plant, in any region of the world. They’re not exposed to bad weather or failed harvests, this gives them the potential to have the greatest impact on the global challenges. Plant factories are the most viable version of this technology, although as we will discover over time, plant factories introduce their own challenges. While they have a greatest level of real-world practicality, they still face criticisms around the cost, real estate and energy consumption. So how valid are these criticisms?

In order for vertical farming to positively change the world, it needs to be technologically feasible, environmentally sustainable (or at least better than current practices) and economically viable.

While this industry is still in an early phase, from a technological standpoint, vertical farming works. While it is true that the current farms focus almost exclusively on leafy greens and herbs, pretty much any crop cal already be produced this way with existing technology.

Vertical farms use less water than traditional agriculture, a lot less. In the best vertical farms, one kilogram of lettuce requires 1.2 litres of water. This is especially impressive given that lettuce is 95% water. 1.2 litres is 17 times better than a normal hydroponic greenhouse and in stark contrast, field grown lettuce requires a staggering 237 litres per kilogram of lettuce. That’s 200 times more water! The water saved has a huge positive impact on water and reversing wetland destruction. Vertical farms don’t need pesticides, they require little fertiliser and don’t have uncontrolled agricultural runoff. These factors combined are great news for freshwater wildlife. Since they can be built near population centres, proponents of this technology often argue that urban farms allow for a reduction in carbon emissions, due to a reduction in food transport. While this is largely true, the extent of the benefit is often exaggerated from a climate perspective. Food transport makes up a relatively small portion of agricultural emissions, the real environmental opportunity for vertical farming is the potential to return farmland to forest and shrubland. This will be a massive benefit for wildlife conservation efforts and also has promise for significant global carbon sequestration. But how much land can it save? This technology has a vastly greater yield for a given area, with the cutting edge farms having a growing density over 100 times greater than field grown. This has enormous potential for reversing deforestation and habitat destruction. However, vertical farms trade energy for density control. It’s how they achieve bigger yields for a small area of land. Artificial lighting accounts for 80% of the farms energy costs, based on the current global energy mix, most of that energy requires carbon emissions to produce. So on balance, are plant factories good for the environment and can they be solar-powered?

Vertical farms can be expensive to set up, especially if you want a big operation. Running costs can be high from a labour and electricity perspective. While labour costs decrease with the scale of the operation, it is difficult to shrink the electricity costs. Plants need light energy to grow, in a field the sun provides it for free, in a vertical, but in a vertical farm it must be supplied. Since leafy greens and herbs have a low light requirement and reasonable profit margins, they are more economically viable. There are hundreds of them in operation around the world. Some of them are massive in scale. Capable of producing 30,000 heads of lettuce per day from a single farm. A 2014 study of 165 Japanese vertical farms found that 25 percent were profitable, 50 percent were breaking even and 25 percent were making a loss. These are promising numbers for such a new industry. Rapid technological improvements and a greatly expanding knowledge base, have greatly improved the profitability in just four short years since the study.

Now, the question is no longer can a vertical farm work, but how big can this industry get and will this industry ever grow more than leafy greens?

How To Care For Indoor Plants

In their natural habitat, most indoor plants are used to a warmer, more humid or much dryer environment than... read more

With the current trend for home working becoming more popular than ever, it's estimated that demand for office space... read more

The Different Types Of Grow Lights

As the Hydroponic equipment market keeps growing, so does the number of different types of Grow Lights. In this... read more

Hydroponic Houseplants For The Festive Season

Pinpointing a nutrient deficiency early can be the difference from having a healthy productive plant and a plant that... read more

Become Self Sufficient With An Indoor Garden

There is nothing better than eating a piece of fruit or veg that you grew yourself and one of... read more

Sign Up To Receive Exclusive Email Offers, Discounts, Hints and Tips Straight To Your Inbox